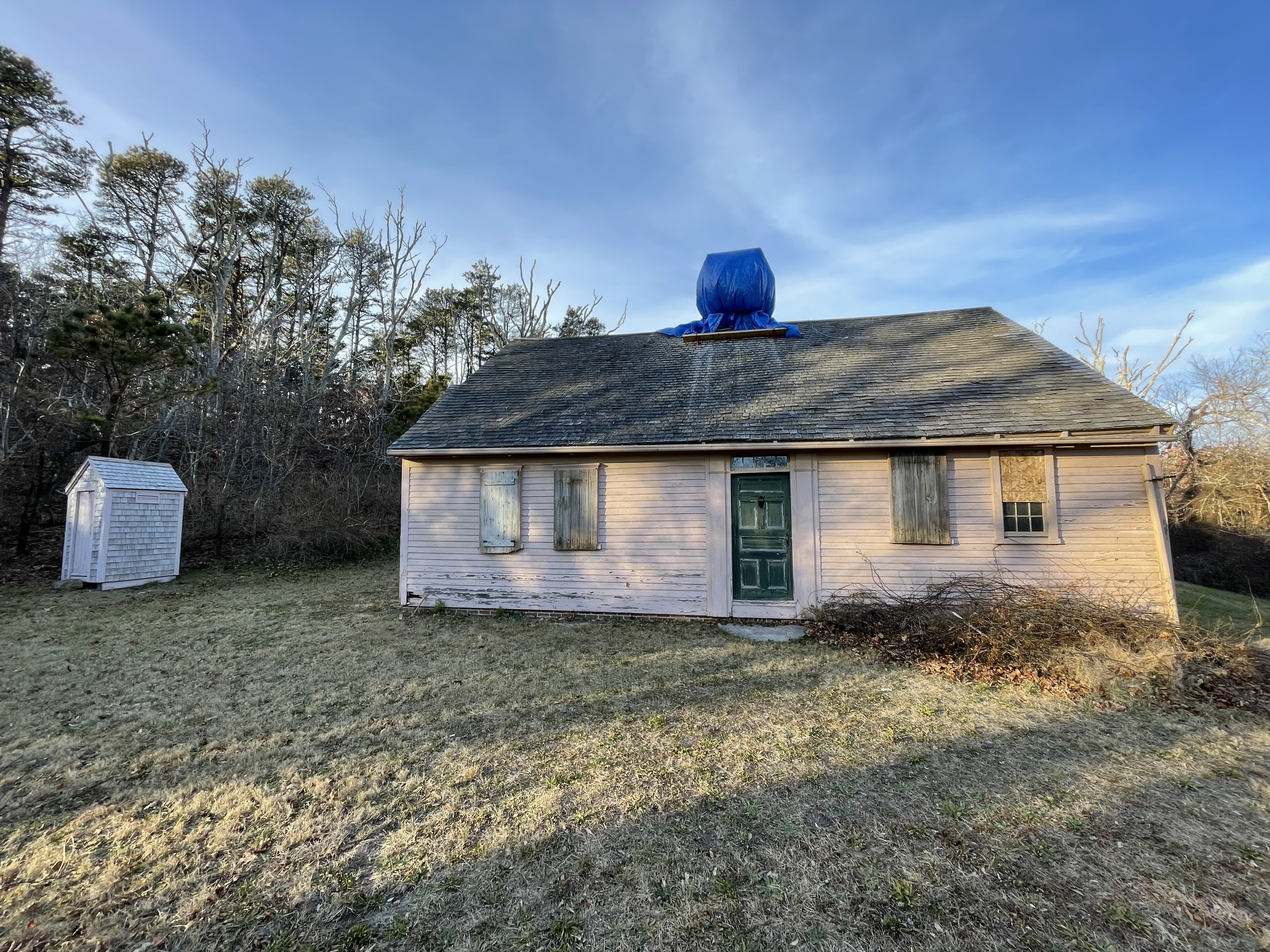 I live in a house that was built circa 1820 by a man named Thomas Paine. He was likely a descendent of the land speculator who established Truro as a town in the 1720s — probably a great-grandson. It’s a three-quarter Cape — which means that it has three windows on the front facade rather than the four of a ‘full Cape.’ There are some layout differences between full Capes and three-quarter Capes (as well as with half-and quarter-Capes), but there’s surprising design consistency amongst these houses over more than two centuries. Since buying my house, I’ve become very interested in these buildings, the intelligence of their design, and the ways they’ve been adapted over time.

I’ve also been long-obsessed with the Atwood-Higgins House and Historic Area. It was built about a century before my house (c.1730) on Bound Brook Island. It’s now held by the National Park Service. I’m told it’s sometimes open for tours in the summer,  but I’ve never been able to figure out the schedule. Like so many properties held by the Park Service, it’s not routinely cared for and always strikes me as being in danger. A report from 2010 indicated that the Park Service had agreed to make repairs to the site, and I’m happy it seems that this winter some repairs are underway.

As I’ve written before, Bound Brook Island was connected to the mercantile industry of Duck Harbor (before it silted up). Atwood-Higgins is on the inland side of the island, so it’s difficult to imagine that its occupants were (at least entirely) focused on the sea. And the Atwood-Higgins Historic Area is a bit of a red herring. While the main house reflects its 18th century reality, the rest of the buildings on the site — a well house, guesthouse, barn, and colonial store  and post office — are a 20th century Colonial Revival folly. One reason for the tremendous disrepair is that when the Park Service took over the site in the 1960s, site was viewed as ‘inauthentic public history’. Today, it’s considered a good example of ‘inauthentic public history’ — and worthy of preservation because it marks Cape Cod’s shift from industry to tourism.

But I’m getting a head of myself. 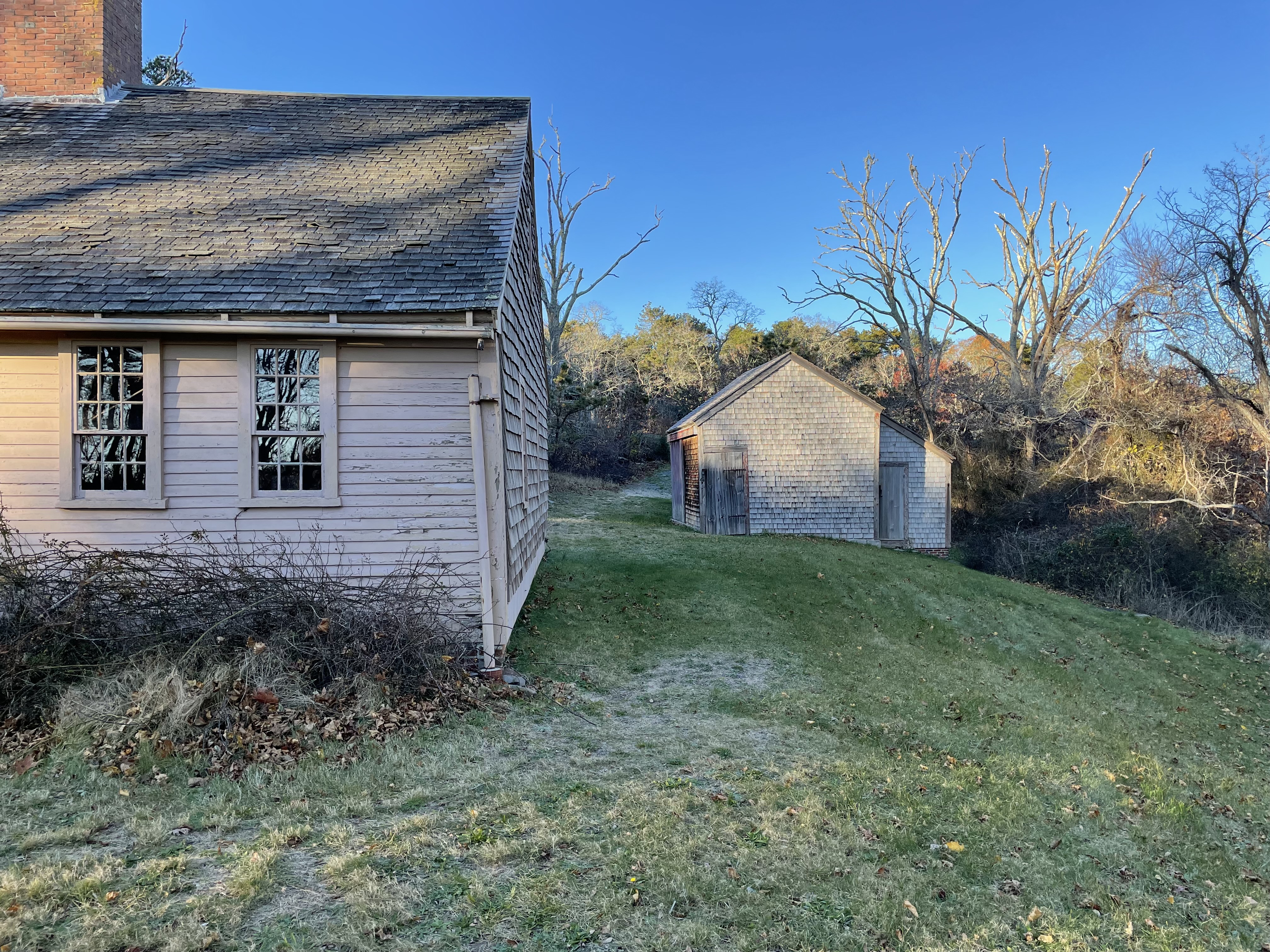 Arthur P. Richmond’s fantastic book, The Evolution of the Cape Cod House: An Architectural History — which I can’t recommend enough — has a beautiful entry on the Atwood-Higgins House. Built around 1730 by Thomas Higgins, Richmond believes an earlier European house might have been on the site as early at 1635 — nearly a decade before Eastham (which then included Wellfleet) was colonized. George Higgins, an ancestor of Thomas Higgins, began renovating the property in 1919 and continued the work until his death. George Higgins gave the property to the National Park Service in 1961 when the Cape Cod National Seashore was established.

‘Cape Cod House’ is a bit of a misnomer. It’s a vernacular style of house that’s found throughout New England. The name comes from Rev. Timothy Dwight, Yale University’s eighth president, who coined it in his posthumously published book, Travels in New England and New York (1821–1822). Dwight’s observation was that these houses were the dominant domestic structure on cape Cod, and the name stuck. The structure has antecedents in 16th century English architectural, but evolved into the building we know in New England. 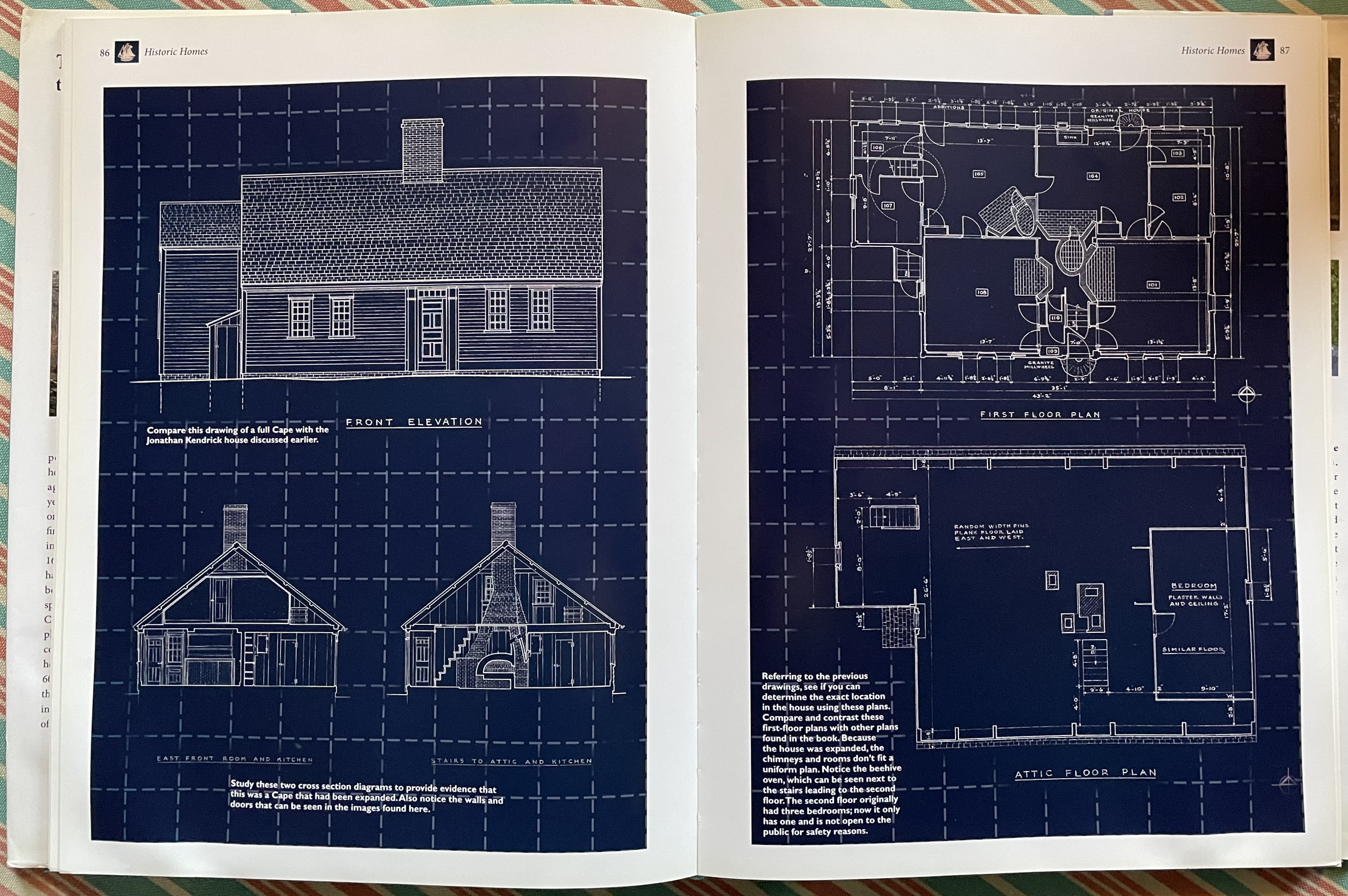 Cape Cod Houses are defined by the number of bays they exhibit on the front elevation. They sometimes begin small (half-Cape, three-quarter Cape, or one-quarter Cape) and get added to as needed. The oldest part of the Atwood-Higgins House is half-Cape with three bays (two windows and the door) — and what’s now the central chimney would have been the original outer wall. The Park Service notes that there were two subsequent additions — eastern bays (two more windows on the from elevation) and the back ell — with the final expansion being completed in 1820.

Cape Cod houses generally have a consistent layout with a formal parlor and bedroom flanking the front entry, with a ‘keep room’ and ‘buttery’ spanning the back of the building. Under the buttery would be a circular cellar for storing food and under the keeping room — which is a quirk of these house on Cape Cod — is a second circular cellar used as a cistern. To one side or the other of the back half of the house (in my house it’s adjacent to the buttery) you’ll find a ‘borning room’ — used for childbirth and isolating sick family members. Upstairs is less consistent, sometimes holding multiple bedrooms and sometimes more of an open dormitory. Many of these houses on Cape Cod originally faced south, allowing the low front facade to cut storm winds and the roof to capture passive solar heat.

I’m fascinated by George Higgins’s Colonial Revival effort to create a living history museum. He did this in the same era as the creation of Colonial Williamsburg. Like Colonial Williamsburg, the project neglected the complexity of the Colonial period in favor of an idealized, whitewashed vision. Williamsburg has been long-criticized for erasing the role of Black people in Colonial America — which is little surprise as its creation was supported by the Daughters of the Confederacy. Both projects arise in an era when a flurry of ‘public history’ projects sought to solidify a White Supremacist vision of the United States through the establishment of monuments, holidays, and history narratives that valorized white ancestors while obscuring the contributions and existence of Black people, Indigenous people and immigrants.

Reading these sites requires care and a critical eye — on both what’s represented and what’s missing. It’s easy to criticize Williamsburg for its erasure of Black history, but there’s scant memorial to Black experience on Cape Cod in that period, either. For instance, both of the ‘founders’ of Truro — one of whom being the likely great-grandfather of the person who built my house — were slave owners. We have the responsibility to tell more complex and complete histories — and to become more critical interpreters of the historic breadcrumbs sprinkled by our recent forebears.

Interior doors photographed through window on eastern side of building, Atwood-Higgins House, November 2021.

In a sense, what George Higgins did in creating a nostalgic vision of the past is what we continue doing today. Cape Cod’s current frenzy of renovation, with its profusions of ahistorical front porches, straight lines, granite stonework, and formal gardens has no grounding in the actual past, but rather speaks to our generalized, whitewashed nostalgia about a ‘nicer past.’ It erases the complex, lived experience of those who came before us. In making this point, I’m not arguing against adaptive reuse. The houses we inhabit need to attend to our contemporary ways of living. Rather I think we need to be honest about what we’re doing, and make sure we don’t completely obfuscate those parts of our history that are inconvenient to our contemporary self-portraits. 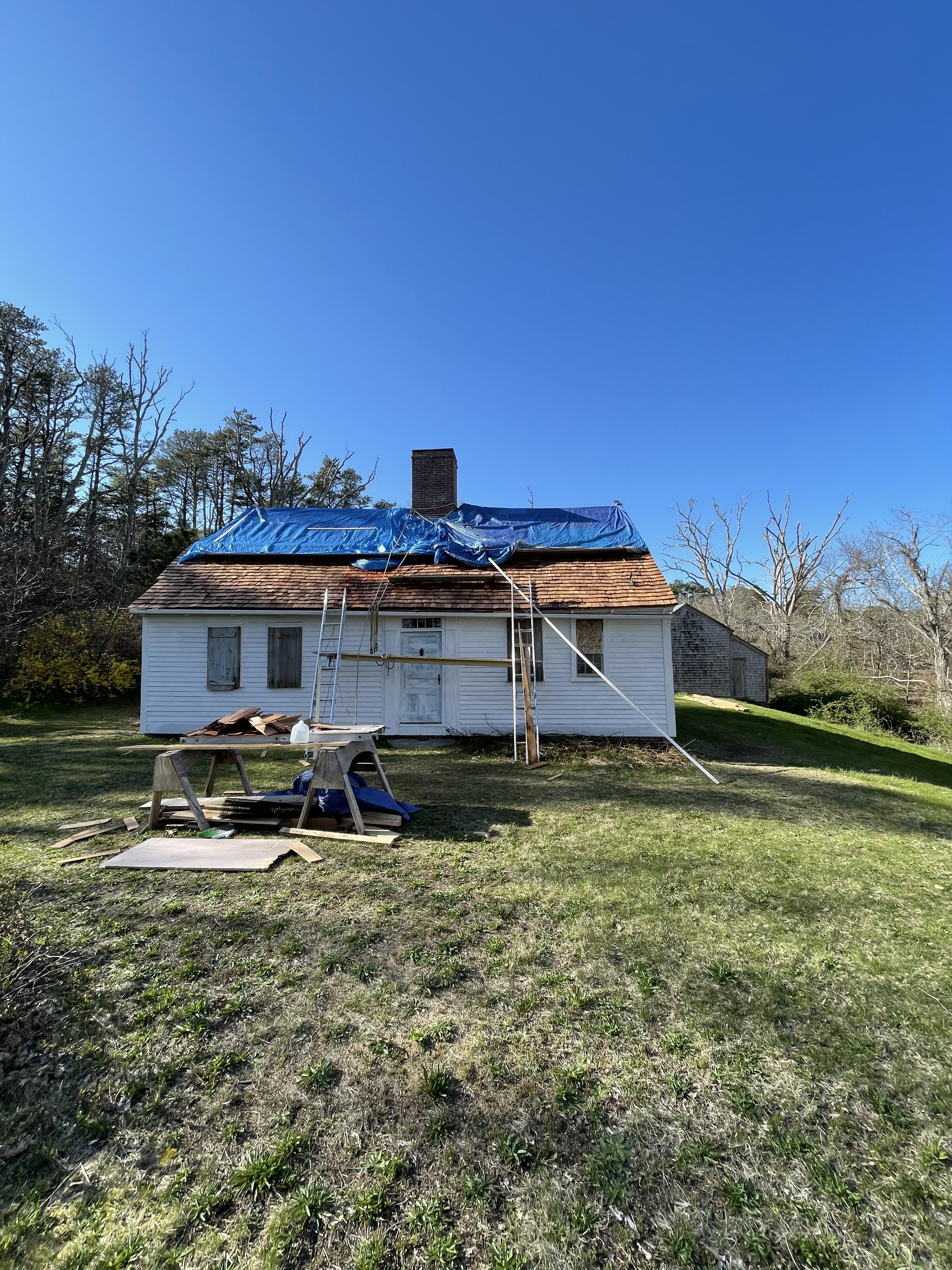 One thought on “Cape Cod House”